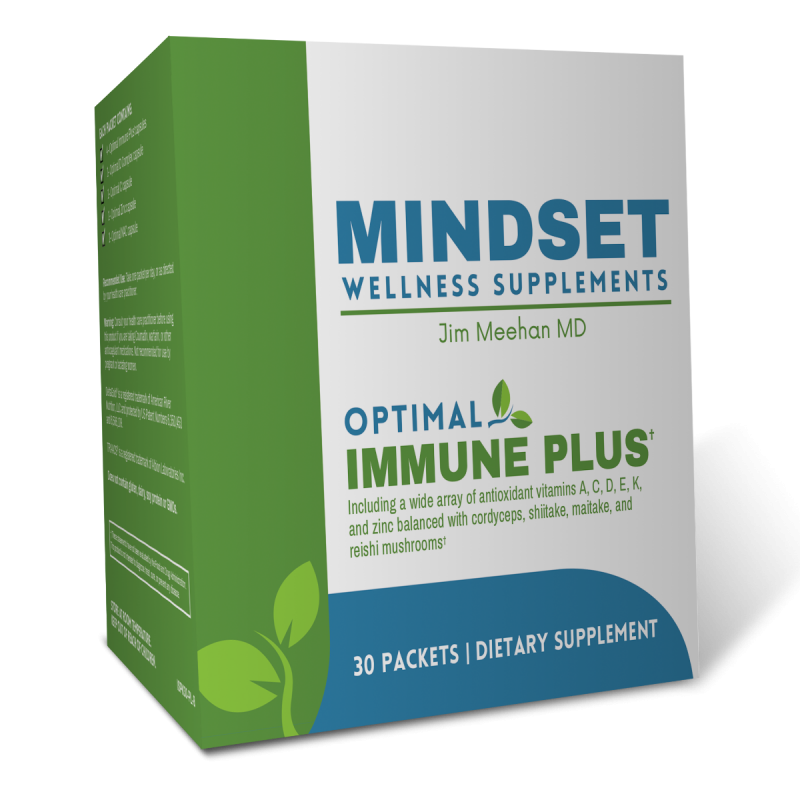 These packets provide a comprehensive arsenal of immune-supportive nutrients, helping the body maintain a strong defense. Products that comprise these packets were selected for their abilities to promote an overall healthy immune response, providing the body with efficacious amounts of anti-oxidative vitamins, minerals, and phytonutrients. *

The packets include the following:

Optimal Immune Plus provides antiviral and antibacterial support as well as the ability to maintain natural killer (NK) cell activity and the synthesis of cytokines (immunomodulating agents such as interleukins). This formula contains an array of botanicals such as green tea standardized to a very high level of EGCg as well as standardized echinacea, elderberry, astragalus, and andrographis. Standardized herbs contain optimal and consistent amounts of the most active compounds. Other highlights include several mushrooms (cordyceps, shiitake, maitake, and reishi), all containing diverse biological activity with various degrees of immunomodulatory and therapeutic health benefits. The fatty acid lauric acid (monolaurin) is included for its antiviral properties and T-cell proliferative effects. Rounding out this formula are the polysaccharides larch tree (arabinogalactans) and beta 1,3 glucan, included for their abilities to stimulate immune cells.

Optimal D Complex features 2,000 IUs (50 mcg) of vitamin D, along with efficacious amounts of the other fat-soluble vitamins, A, E (tocopherols and tocotrienols), and K (K1 and K2). Supplementing clinically relevant amounts of vitamin D creates a greater need for its other fat-soluble counterparts. Vitamin D has many health benefits including protecting the body from respiratory infections. Studies show that a deficiency in vitamin D increases the risk of such infections, including colds and flu. Vitamin D is involved in modulating two important aspects of the immune response: the function of T-cell lymphocyte and the production of interleukin-10 (IL-10). By doing so, this helps to better arm and activate the body’s immune system in order to destroy pathogenic bacteria and viruses and fight off infections. The other fat-soluble vitamins in Optimal D Complex are equally as important. Vitamins A and E are both involved in the development of some of the most important lymphocytes (NK cells, T cells, B cells), white blood cells responsible for the body’s immune response. Supplementing with vitamin E also helps reverse an age-related decline in T cell function, an important factor for the elderly whose immune system often weakens with age.

Optimal C is rich in vitamin C (600 mg from a mixture of ascorbic acid and acerola fruit) as well as the plant bioflavonoids hesperidin, rutin, and quercetin. Vitamin C shines in its immune-enhancing abilities by helping reduce the risk, severity, and duration of respiratory tract infections such as colds and flu. Supplementing with vitamin C has been shown to improve antimicrobial and natural killer cell activities as well as lymphocyte proliferation. The plant bioflavonoids included support the immune system by protecting cell membranes against oxidative stress from things such as germs, toxins, environmental pollutants. Bioflavonoids, nature’s antioxidants, work synergistically with vitamin C, as they are found in fruits such as oranges and grapefruits.

Optimal Zinc is an important addition to these packets, as zinc is involved in virtually every aspect of immunity. This mineral has antiviral properties and is even effective against several viruses that cause the common cold. Supplementing with zinc has been shown to stimulate the production of white blood cells, as well as support the actions of neutrophils, T-lymphocytes, and natural killer cells. Zinc helps to increase the number of T cells, especially in the elderly, as this population is often deficient in this mineral. Zinc is also required for producing thymulin, the major thymus hormone. A reduction of thymulin may lead to impaired immune function. Optimal Zinc offers chelated minerals for superior bioavailability and optimal absorption.

Optimal NAC helps to increase glutathione levels, the body’s most powerful antioxidant and the one most important to overall health. N-Acetyl-L-Cysteine and glutathione have been shown to minimize the onset of oxidative stress. Glutathione is needed in every cell throughout the body and is involved in regulating the body’s immune response. Research shows that lymphocytes from healthy humans have optimal glutathione levels, while low levels in the body have been associated with common illnesses and a weakened immune system. Building a strong defense against viruses such as the flu is dependent on sufficient levels of this vital antioxidant.

*These statements have not been evaluated by the Food and Drug Administration. This product is not intended to diagnose, treat, cure or prevent any disease.

Take 1 packet per day or as directed by your health-care practitioner.